After many years of waiting for it to be released, I have finally been able to play Jenny LeClue – Detectivú. It was worth the wait! 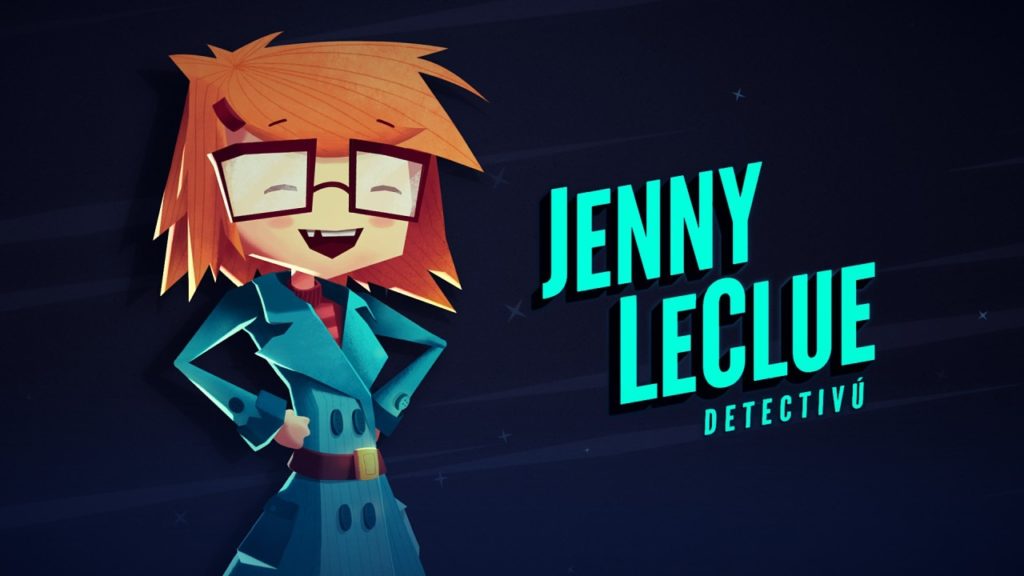 I really enjoyed this game. I started following it about 3 or 4 years ago, and thought that the art style looked really cool. I didn’t know much about what the game would entail, but I knew I wanted to see the final result. And this indie game really delivered on that promise.

The art style is great – the game is built up as a 2D side scrolling game, mixed in with some investigative scenes. The sort of “papercraft” style reminds me a lot of Night in the Woods, another game that I really enjoyed. The way the designers used lighting and colour adds a lot of diversity to the different levels, and makes them look radically different despite the fact that the underlying shapes are basically all the same. I’m not an artist, so stuff like this blows me away.

The characters all have a wonderful cartoony design, both for their appearance and their personality. The game is presented as being late in a series of books about Jenny’s encounters and even though there hasn’t been any actual story before now, the introductions for all the characters makes them seem already familiar and friendly.

The story has some nice layers. It starts of rather meta – with the story author figuring out what to do, and then it goes down through cutsey kid investigations to pretty intense conspiratorial stuff. The game blends all of this together well.

The music is a great accompaniment to the game. The synthy, sometimes oppresive, soundtrack works really well with the detective story. I mentioned NitW, but the games Oxenfree and Crossing Souls sort of fit with this as well. If you’ve enjoyed any of these games, I’d definitely recommend Jenny LeClue as well.

The gameplay itself is decent. The side scrolling puzzle-platformer part of the game is good, but I do have two main gripes. Jumping feels a bit abrupt when Jenny stops at platform edges, and the fact that Jump and Interact both use the same button press makes it very frustrating if you have to move around a box to stand on.

The detective mode puzzles are fairly simple, and the detective work can end up feeling a bit hand holdy. Given the other detective game I played recently, Danganronpa, which is off-the-rails crazy about investigations I guess it’s natural that anything wouldn’t compare with that. However, if you can really immerse yourself in the game, it starts to become less about solving the puzzles yourself and almost more just following along with the story. Jenny is supposed to be a storybook detective after all. The few moments where you do have to think and put clues together to solve something are very enjoyable – I wish there was more of that.

The ending is the only thing I massively dislike about the game. It’s abrupt, and its a cliff hanger. I guess that’s indie games for you. I should be glad that this, as a kickstarted game, even ended up seeing the light of release day. I want to know and play what happens next, so I wish the devs best of luck. Hopefully the sequel will have more interactive detective sequences and wrap things up neatly.