I recently had the chance to peek inside a wasps nest that had been taken down, and I took some photos to share. 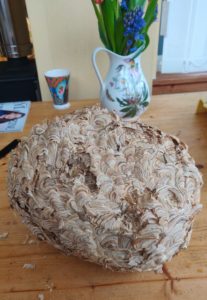 Wasps nests are made of a kind of very fragile paper. Wasps scratch away and eat wood from any surface they can find when alive, and then presumably spit it back up to produce the covering for their nest. All the different kinds of wood they eat produce this wonderful wavy pattern you can see across the layered surface. 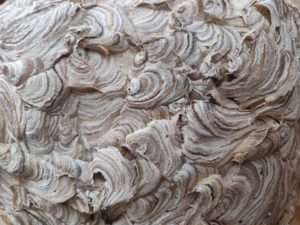 Inside the nest is where things start to get interesting. Cutting into it with a sharp knife reveals that the nest is made up of an outer shell and an inner sanctum where the combs are kept. The outer shell is just more layers of the fragile paper, between 3-10 centimetres deep, and the combs are suspended in the centre.

A single comb is no more than a couple of centimetres thick, and is arranged in a neat regular hexagonal pattern. The bottom side is open, presumably where any new larva would grow, and the top side it closed, with short reaches joining it to the comb above.

All in all there were 4 combs that we could safely extract, there may have other smaller ones closer to the top of the nest, but it probably would have been too fragile to check. Given the very rigid, organised structure everything is built to it is surprising how fragile the whole thing is. It’s just layer upon layer of paper-thin material. 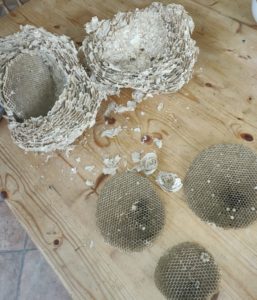 We only found a couple of dead wasps in the nest, the vast majority were lying dead on the hatch to our loft back at the end of autumn, waiting to rain down on the unsuspecting fool who should happen to open it. No doubt next year another queen fill find its way into our home – I wonder if the next generation can beat the size of this one.